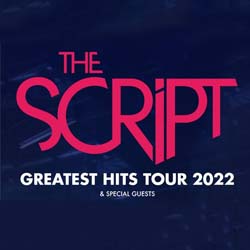 The Script Greatest Hits Tour 2022 is will be holding a concert at IMPACT Arena in Bangkok on the 28 September 2022. The renowned Irish rock band will be performing their chart toppers, including “Hall of Fame”, “The Man Who Can’t Be Moved”, “For the First Time”, “Superheroes”, and “Breakeven”. Tickets presale commences on 30 June 2022, 10am.

The Script burst onto the music scene with their #1 debut album in 2008. Since that debut they have enjoyed six UK #1 albums, more than 6 billion streams, and 2 million concert ticket sales. The band released their “Tales From The Script” greatest hits collection in October 2021 and kicked off their tour with some intimate gigs in February before headlining arena shows throughout Europe and the UK.