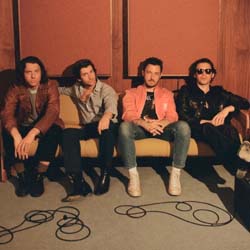 Arctic Monkeys Concert 2023 in Bangkok will take place at BITEC Bangna on the 9 March 2023. Part of the popular British rock band’s tour in Asia, the one-night only show is expected to feature songs from the group’s newest ‘The Car’ album, as well as hits like ‘I Bet You Look Good On The Dancefloor’, ‘Do I Wanna Know’, ‘R U Mine?’, ‘Snap Out of It’, and more.